As active pianists, we understand the instrument from both sides of the keyboard. We’ve helped thousands of clients to enjoy their pianos more deeply. Steve has played the piano since the age of eight. After receiving an AS degree in Piano Technology from BYU, he began his career as a piano technician in the Phoenix area. He later served as head piano technician at the University of Washington in Seattle for 25 years. While working at the UW, he studied Music Theory and Music History at both the undergraduate and graduate levels. During his tenure at the UW, Steve tuned and prepared pianos for nearly 5,000 concerts and recitals, and worked with most of the leading pianists of our time, including Murray Perahia, Alfred Brendel, Andras Schiff, Garrick Ohlsson, Emanuel Ax, Peter Serkin, Richard Goode, Claudio Arrau, Alicia de Larrocha, Andre Watts, Vladimir Feltsman, and Evgeny Kissin. He has also been the official piano technician for the Governor’s Mansion in the state of Washington since 1989. More recently, he served as chief concert technician for the Aspen Music Festival & School for five summers.

Currently the most highly awarded piano technician in the Pacific Northwest, Steve received the PTG Member of Note award in 1996, and was inducted into PTG’s Hall of Fame in 2012. In 2016, he received his profession’s highest honor, the Golden Tuning Hammer. Steve understands what a piano needs to make it play and sound like the instrument of your dreams. 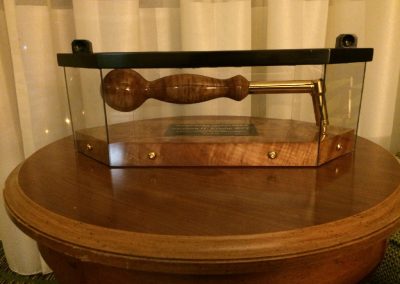 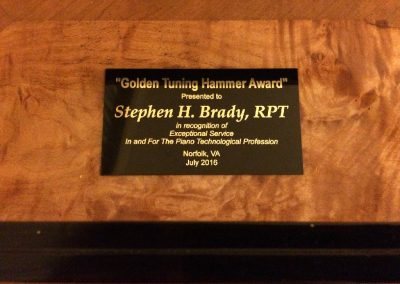 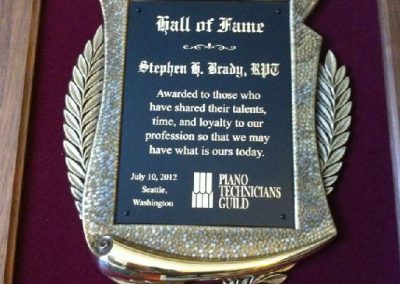 Skye Meadows has been a pianist all her life. From an early age, she competed in numerous competitions with AMTA and MTNA and was a state winner throughout high school. She attended the prestigious Boston University Tanglewood Institute and the Aspen Music Festival and School, and graduated from the famed Eastman School of Music where she studied piano and music theory.

Skye’s experiences as a pianist gave her a distinct understanding of the need for highly skilled piano technicians. She first realized an interest in piano technology in 2007 during a class at the Eastman School of Music, and she later completed a course of study with the Piano Technician Academy and joined the Piano Technicians Guild. Her recent clients have included Jacksonville State University, Wallace State Community College, University of Alabama, and Alabama Steinway Gallery. Skye is dedicated to bringing pianos into the best possible condition for the expressions of musical nuance and feeling for pianists of all stripes.

Skye’s work is outstanding. She tuned my Steinway grand and told me it needed regulating. My action was only gone one week, and when she returned it, I fell in love with it all over again! My students have been delighted with the range of dynamics it now possesses. Plays like a new piano. And Skye is a friendly, fun person.